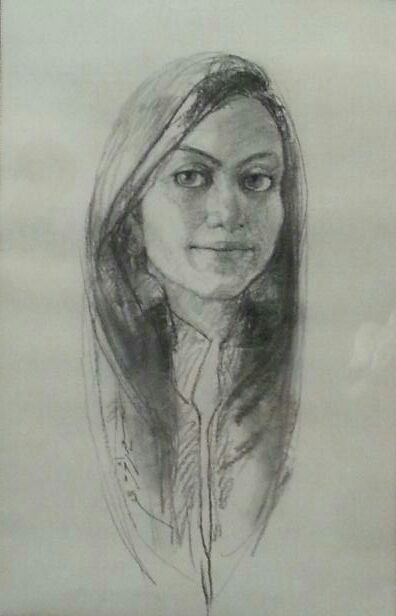 Recipient of Pakistan’s esteemed civilian awards Sitara-e-Imtiaz (Star of Excellence) 2012, Tamgha-e Husn-e Karkardagi (Pride of Performance) 1994 and Fellow of National College of Arts Lahore, Prof. Saeed Akhtar is among the most celebrated contemporary artists of Pakistan. He has played an iconic role in the promotion of art and art education in Pakistan. His hard work, dedication and perseverance in disciplines of Drawing, Painting and Sculpture have inspired generations of Pakistani artists, marking his lifelong meritorious contributions. The subject of comprehensive monographs published in 2009, 2011 and 2015 from Lahore, his work adorns prestigious public and private collections all over the globe. The content of Saeed Akhtar’s work has mostly been aimed to put on view, man’s quest for the Divine amidst sheer mortality. Richly consistent yet inventive in nature, his drawings and paintings seem to depict tools for celestial intervention along with crafting vessels to hold the transient moment. His sensibilities of form, texture and colour define his oeuvre lending any medium that he uses, a pulsating emotive quality.

Founded in 1966, Saeed Akhtar Studio (SAS) is the workplace for the artist, located in Johar Town, Lahore. Along with hosting summer workshops that are held annually for children and adults at SAS, the space houses a comprehensive representation of Prof. Saeed Akhtar's practice.