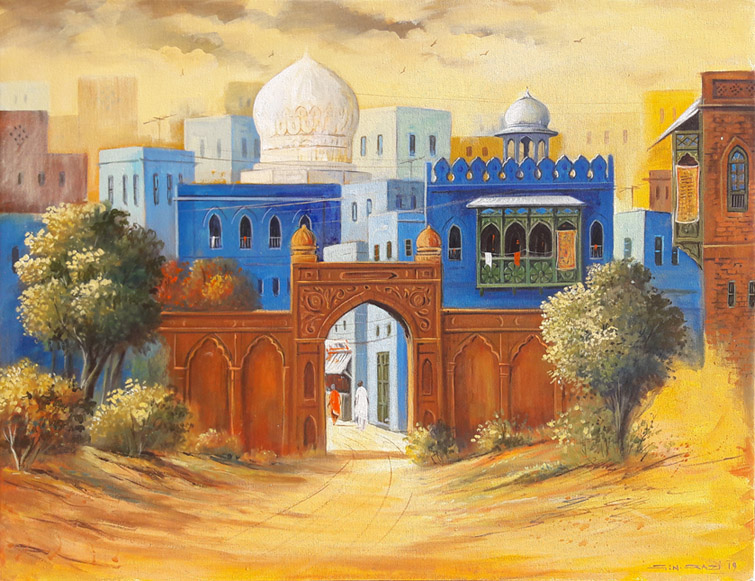 Born in 1975 GN Qazi is a distinguished Pakistani artist who paints the old architecture of Sindh which dominates its paintings. who acquired a diploma in fine arts from The Karachi School of Arts in 1995, has many solo and group exhibitions to his credit, most of the solo shows being held in Karachi.

Qazi's distinctive style has earned him a reputation as a skilled artist. He has been exhibiting his work in various art galleries around the world. Capitalizing on the inherent beauty of old architecture His paintings tend to revolve around his hometown - Thatta and its charming facades, he conjures a world imbued with both nostalgia and peace, and attempts to preserve the remnants of our tangible heritage. Yellow dusty lanes, bazaars with vendors displaying prices and old 'havelis' with half broken wooden balconies are his favorite subjects.

The mixed media paintings that recreate the old architecture of Thatta, Hyderabad, Sukkur and Karachi are both real and yet surreal in their ambiance. Texture is created by combining various mediums and painting techniques, and both thick layers and watery drips of color are expertly combined in the works.

He has also been addressed as ‘collectors’ painter’ by critic as his work is likely to be acquired by various art dealers and collectors in the city. color, pattern and design are Qazi’s forte, and he uses these to create his memories and visions of a partly lost and slowly vanishing environment that deserves to be preserved. He brought forth the realities of life on his canvases without letting down aesthetics. Qazi deft strokes and unique way of looking at and painting urban structure, especially his imaginative use of light distinguish him amongst his peers.

GN Qazi has also done paintings other than landscapes. He also have painted human forms in a number of his works, usually as solitary figures in the architecture dominated environment created by the artist His contemporary figurative work on canvas is worth celebrating because of his unique style.