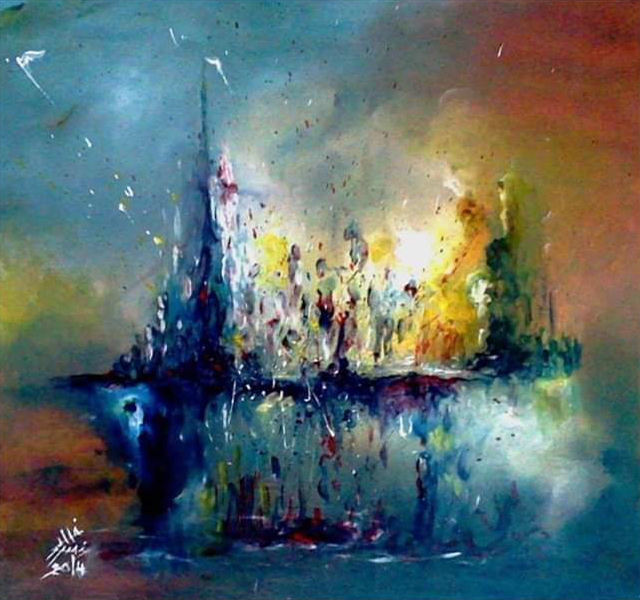 Khaled was born in 1962 in the central Gaza Strip refugee camp of Nuseirat, as his family was displaced by Israel from the Palestinian village of Barbara, back in 1948, when Israel expelled more than 700,000 Palestinian villagers, majority of them used to lived in 450 villages,  tens of kilometers away from the Gaza Strip, where Khaled's extended family, now lives.

-He is a holder of B.A of Media and Communication.

-Founder and head of Artists without Borders Association

-Founder of the International Oasis for Fine Arts

-Head of the International Center for Fine Arts, Palestine Branch

-Board-member of an American Gathering for Human Development Trainers

-Holder of an Honorary PH.D, granted by the Ukrainian Academy for Professionals

-Holder of an Honorary PH.D, granted by the Canadian University of Talent.

--Holder of an Honorary PH.D, granted by the German Cultural Center

-Has won several art awards, granted by a variety of arts festibals, exhabitions and workshops, held in some Arab countries .

-He has held 15 arts exhibitions of his own inside and outside of the Palestinian territories.

Khaled has been able to invent a new form of art that is based on turning a media story into a piece of artistic work. On this, he has so far held three exhibitions, with the title, Camera and Paintbrush.

Recently, the talented artist has been subject to a quarantine for more than three weeks, after he has returned back from a business trip in nearby Egypt. The quarantine that he has experienced was because of the internationally-spread pandemic, Coronavirus or Covid-19.

Though, Khaled's talent has turned the quarantine into creativity.  During the three-week quarantine at one of the local schools, in central Gaza Strip, Khaled was able to create 30 pieces of art works, reflecting the risks and precautions, beyond the Covid-19 pandemic. All of such works have been reportedly highlighted online and on many local, Arab and international media outlets, including TVs, Radios and Print.

Noteworthy, over the past fifteen years of hard work and creativity, many of Khaled's pieces of artistic work have been used as covers for a number of books, written by some well-known Arab poets and novelists, including Dr. Noran Foad and Dr. Atiyat Abuelineen.

The Jordanian Ministry of Culture has recently nominated artist Khaled to represent Palestine in the Erbid International Cultural Festival of 2020. The festival would involve around fifty other artists from various Arab and world countries. The Jordanian town of Erbid, itself, has been chosen as the Arab City of Culture for 2020.

In addition, the World Arts Wings organization in Morocco, has nominated Khaled to represent Palestine in it's upcoming festival. This same organization exhibited Khaled's pieces of arts in an exhibition of it's own, for the fight against Coronavirus, held in June, 2020.